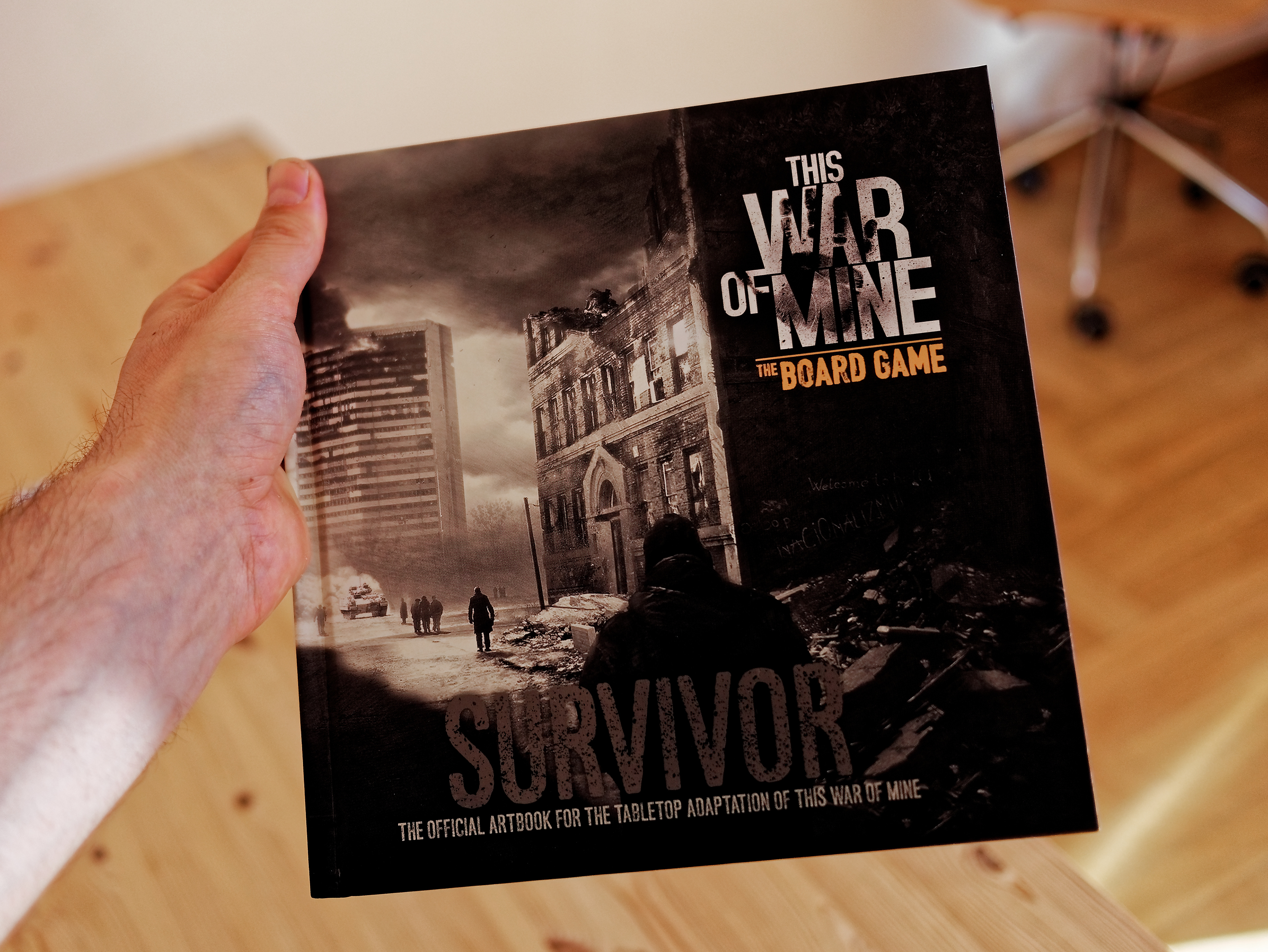 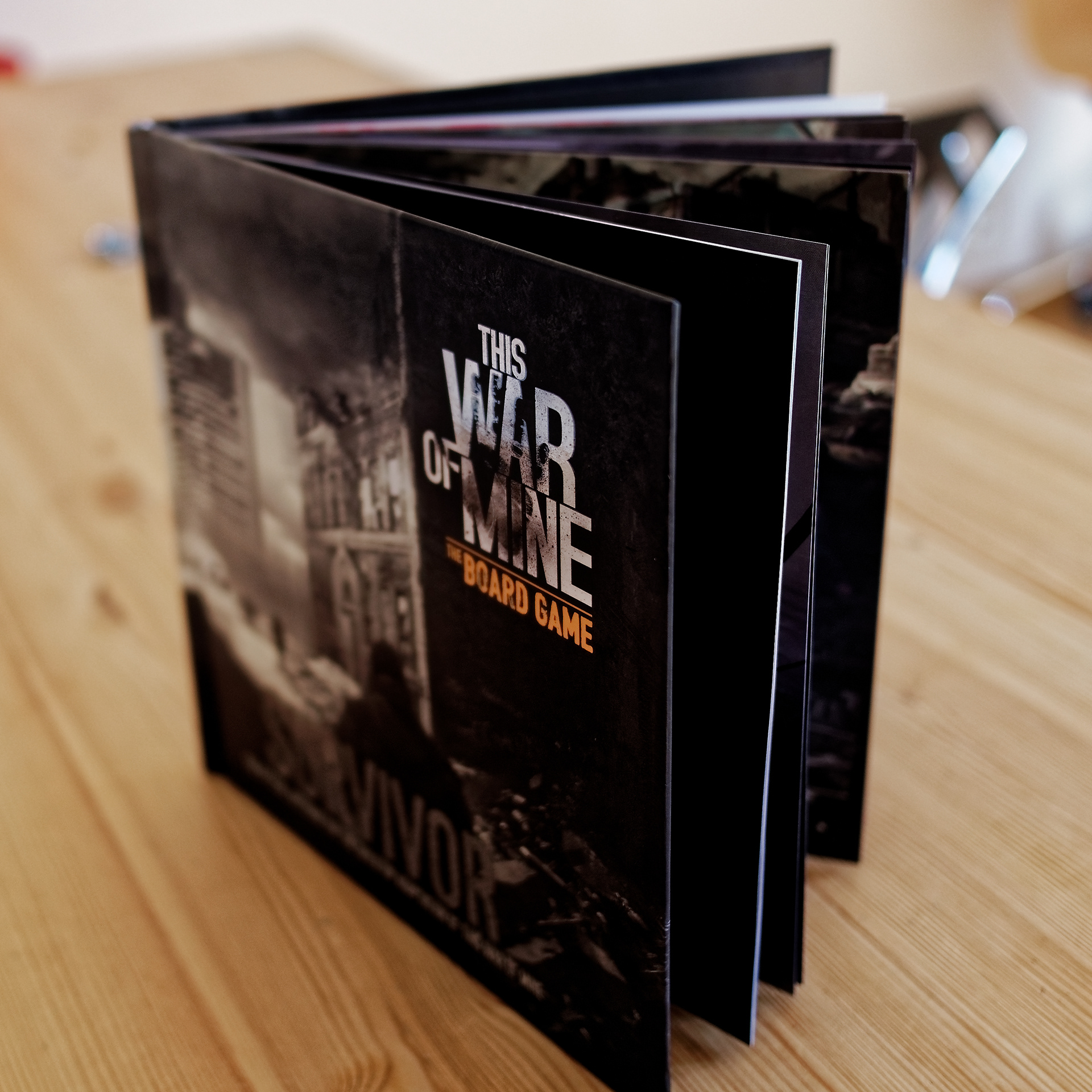 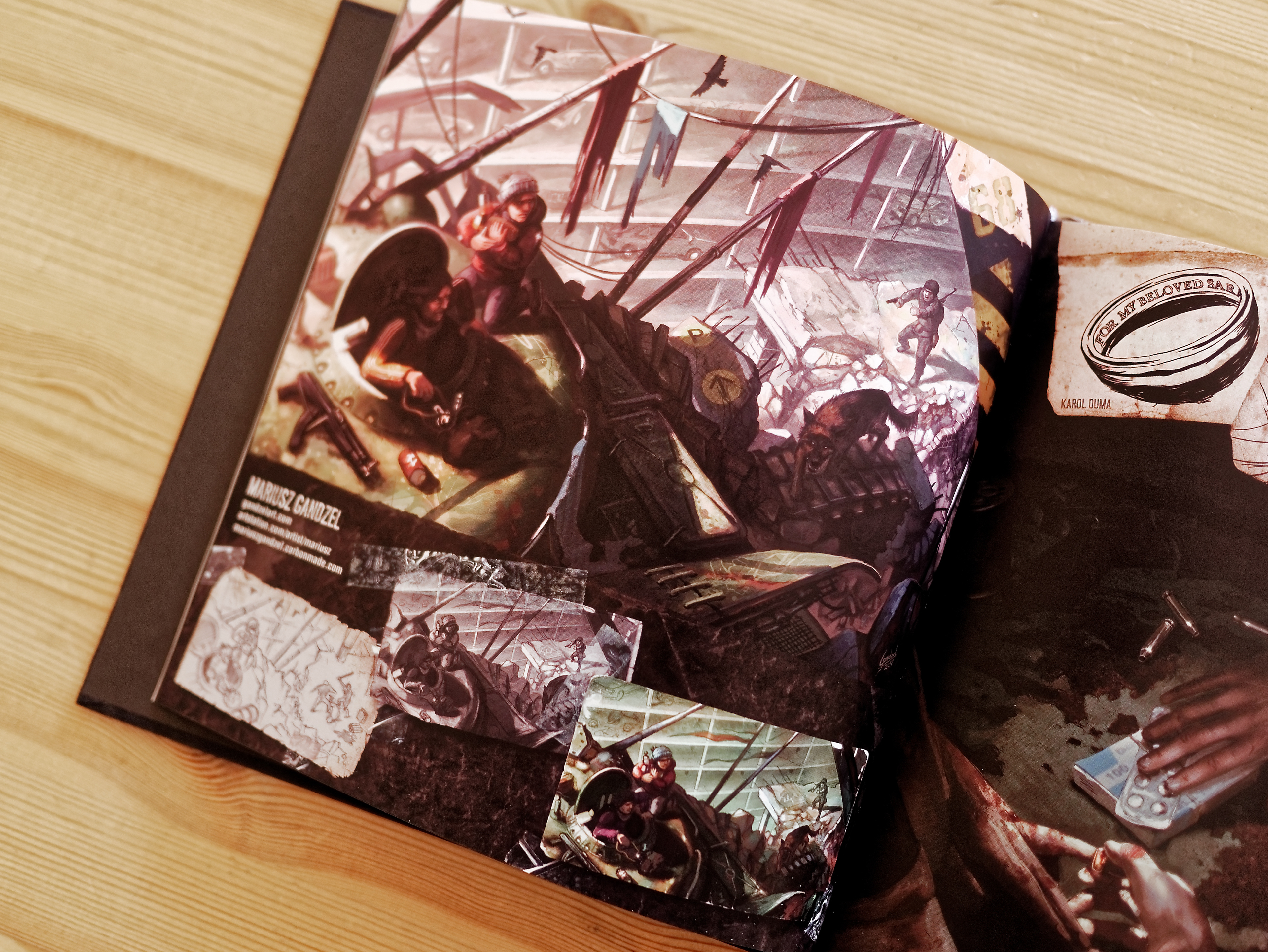 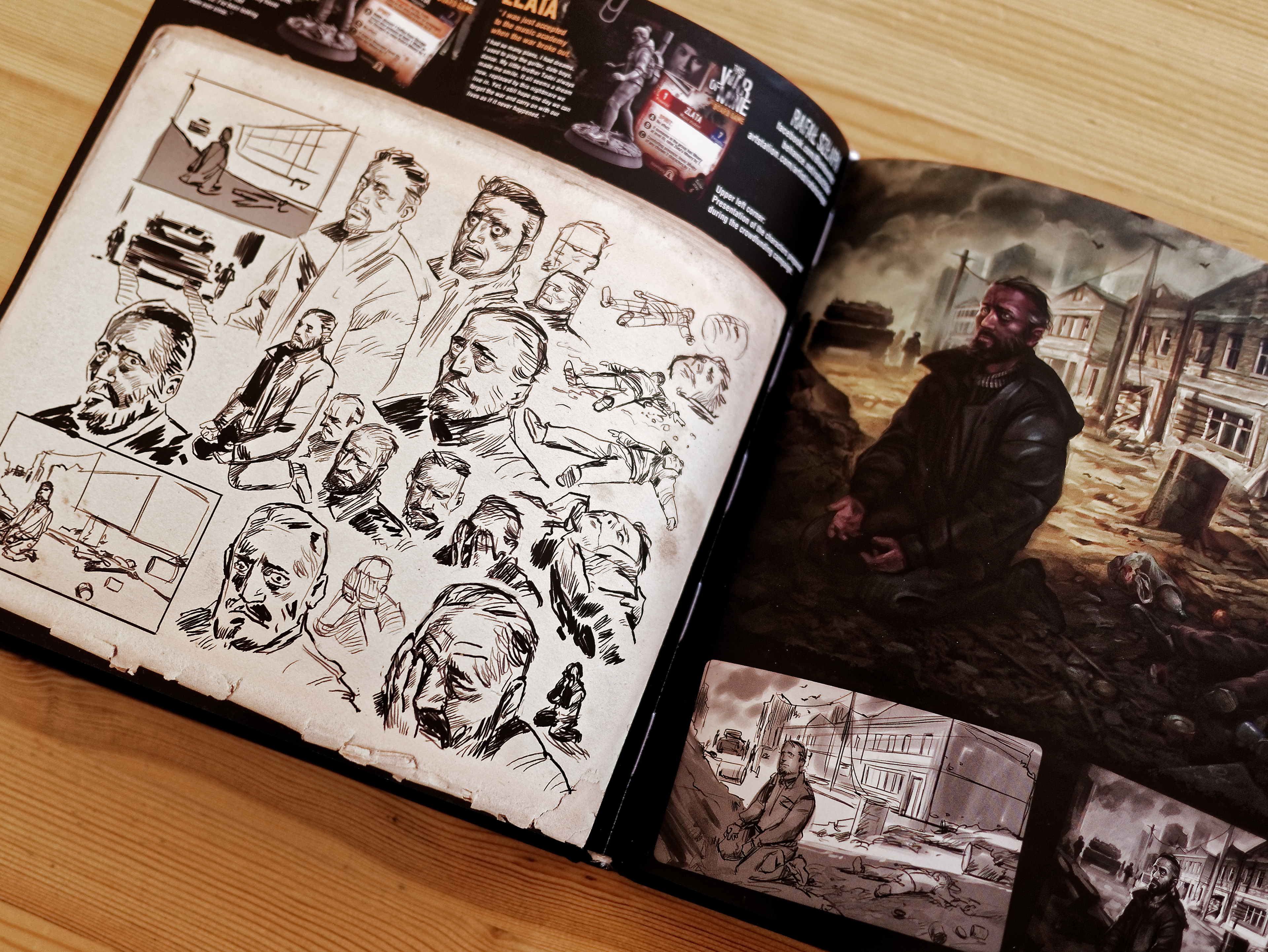 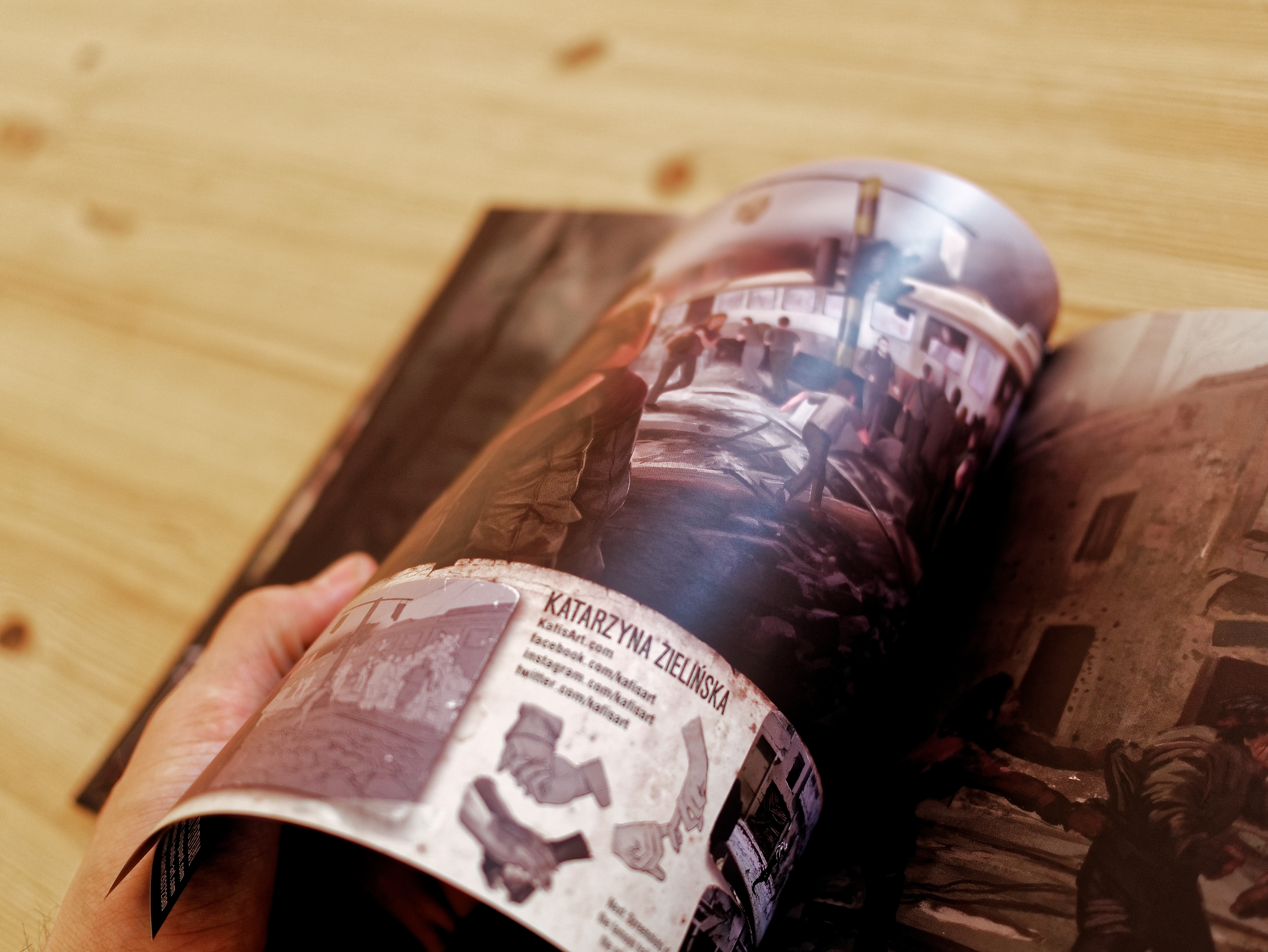 2014 was the year that saw the premiere of This War Of Mine, created by 11 bit studios. The amazing tale of a group of civilians trying to survive in a modern city torn and ruined by a lasting civil war and siege was soon on everybody’s lips. It was a product that had never been seen before, not only in-the field of war games, but in games in general. The digital version of This War Of Mine was incredibly inspiring and, as a result, the tabletop adaptation of the title came to life. In turn, that adaptation inspired the Artist On Board group who have created a whole series of illustrations for the game and which now comprise this artbook. Artist On Board (AOB) was established in 2014, mainly thanks to the efforts of Tomek' “Morano” 'Jedruszek, Mariusz Gandzel, and Rafal Szlapa. Today
it consists of a few dozen game industry illustrators, many of whom are good colleagues who have also worked with us before. At the very beginning of our work on the board game version of This War Of Mine, the AOB group became the official artistic patron of the
game, something which is a very uncommon practice in the game industry. The outcome of this collaboration was an amazing event that took place on the very day that the Kickstarter campaign for T WOM: The Board Game went live. Over one night, the four artists from AOB (the fifth one was there with us virtually) spontaneously and in complete
harmony created a gigantic anti-war painting, letting their artistic interpretation of the topic roam free, allowing them to present their vision to others. I The painting itself as well as some of the photos from the artistic event can be found at the very end of this artbook. Quite some time later, When the work on the board game was nearing its end,.AOB begun their Work on the illustrations for the artbook. Knowing who the members of AOB are and what they represent, we expected great results, but we were met with something much more. Their engagement with the project as well as their forms of expression were beyond whatwe imagined and had planned. The illustrations were initially supposed to be simply an addition to the graphics already present in the original game as well as those from its board game adaptation. However, what we were presented with by AOB were 25 dedicated illustrations, painted especially for this occasion, and which can be seen in this artbook. And while some of the original graphics can be seen in the game, these 25 specific illustrations cannot be seen anywhere else. They have not even been used for the board game since they came to life once it was finished. The remaining graphics (such as the locations created for the digital original by 11 bit studios and the incredibly detailed models of the characters made by Awaken Realms forthe casting of the miniatures), while
also unique and interesting, became supplemental to the artbook, filling spaces between the illustrations. This has also occurred because, although unique, these other graphics can be seen elsewhere, either in the digital game or its tabletop adaptation.
The A0B illustrations are available only here. This is also the case with the other incredible thing presented in this artbook: the diorama. This amazing study depicts ”the crosssection of the destroyed tenement and was built at the very beginning of-ihe work on TWOM: The Board Game. Just like the models of the characters, it was created by the Awaken Realms
team. This diorama spent time in Pax East as well as the Essen Spiele, but finally made its home —which is an incredibly important fact for us — in the headquarters of the creators of the original This War Of Mine_ experience, 11 bit studios. Throughout this book you will also find a range of photos. Some were taken in the early stages of the creation of the game, as well as during the Kickstarter campaign. These images, along with many more, are stored in our archive. At present. these photos are more of a curiosity than anything else. However, we have included them as we believe that the time for memories will be in the years to come, and we hope that TWOM: The Board Game will stay in your hearts for a long while.
Artist On Board:
Aaron Miller
aaronbmiller.com
Gracjana Zielińska
vinegaria.com
Bartek Fedyczak
facebook.com/bartek.fedyczak
Mariusz Gandziel
gandzelart.com
Karol Duma
artstation.com/artist/duma
Tomasz Jędruszek
artstation.com/artist/morano
Johann Bodin
yozart.blogspot.com
Rafał Szłapa
artstation.com/artist/rafalszlapa
Katarzyna Zielińska
KafisArt.com
Mateusz Kalberos Michalski
artstation.com/artist/kalberos
Greg Bobrowski
gregbobrowski.com
Daria Zersen
dariazersen.com
Katearzyna Świderska
artstation.com/artist/kolsga
Michał Rachwał
michalrachwal.com
Paweł Kaczmarczyk
artstation.com/artist/pfpictor
Marzena Piwowar
artstation.com/artist/nereida
Michał Teliga
artstation.com/artist/michalteliga
Tomasz Ściolny
artstation.com/artist/niko_126
Tomek Larek
artstation.com/artist/tomeklarek